On February 3, Israeli military contractors hoping to win big U.S. government contracts gathered at an event organized in Northern Virginia by the Virginia Israel Advisory Board (VIAB) and Fairfax County Economic Development Authority (FCEDA). VIAB is an office of Virginia’s General Assembly. Though self-designated as an advisory board, VIAB functions more as an Israel export promotion council with a strange twist—it is funded entirely by Virginia—rather than Israeli—taxpayers. VIAB’s portfolio of projects—which often compete against home-grown U.S. and Virginia companies—is powered by multitudes of grants and subsidized loans. Nevertheless VIAB has generated a string of failures due to its lack of market discipline, self-dealing and questionable activities conducted mostly in secret.

President and CEO of the Fairfax County Economic Development Authority Victor Hoskins kicked off the Tysons Corner networking event. Hoskins touted direct Dulles to Tel Aviv commercial flights, while highlighting FCEDA’s office in Tel Aviv, open for business for the last fifteen years. The opportunity is immense, because, “We have the biggest customer in the world, I think, the U.S. government, right across the river.”

Oran was a major provider of transparent armor for the U.S. Army until it was caught red-handed delivering out of spec products for Mine-Resistant Ambush Protected vehicles (MRAPs). That led to fines and plummeting military contracts. Greensville County, Virginia undertook enormous financial obligations to bring in Oran on the promise of non-temporary jobs in the depressed region. At the conference, Hoch claimed that Oran is now successfully transitioning to deliver glass for Caterpillar tractors and Bombardier trains.

Principal Deputy Director of the Israeli Ministry of Defense (SIBAT) Paul Friedberg praised the sixteen Israeli contractors present at the Fairfax networking event. After words about U.S. Israeli security cooperation, he wished success to all parties gathered in the packed conference center. Other speakers included Eilad Peretz, Lead Researcher for New Space Missions at NASA and the US Department of Homeland Security’s Director of Industry Partnerships, Security Science and Technology Directorate Megan Mahle. 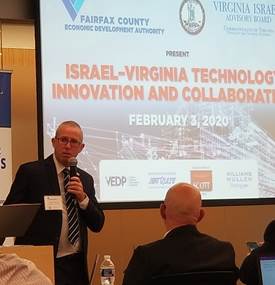 The keynoter of the event was Deborah Lee James, 23rd Secretary of the US. Air Force (2013-2017). After having traveled to 44 countries during her stint, James said nothing impressed her more than the “partnership” the U.S. has with Israel. It is as “tight as they come.” James also praised Israeli industry representatives’ tight connections with “war fighters” due to their own mandatory IDF service.

There are four main opportunities for Israeli contractors, according to James. The first is the $700 billion plus Department of Defense budget, far more than all other U.S. agencies (excepting Social Security and Medicare). No matter who wins the next U.S. election, James assured the crowd, this budget will remain at “quite a high level.”

The second opportunity is great power conflict with China. It is the “pacing threat” against which the U.S. military now “measures itself.” James tipped a hat to the crowd by counting Iran as the “other” “major power” about which the U.S. is worried but saw U.S. focus as generally moving away from the Middle East. Rising budgets have allowed the Pentagon to “do more of everything” in recent years. More people, training and equipment, particularly in the high-tech realm.

According to James, the Air Force is preparing to move $30 billion out of legacy systems and put them into promising high technology ventures. $9 billion will go into fully networked, innovative command and control systems. James had “seen some of that going on in Israel,” which was an opportunity for those gathered in the room, and she expressed interest in seeing what Israel could bring to the table. The need for fast innovation is an opportunity for “nontraditional” players. The obstacles to speedy innovation are fading away, as new authorities have been established for prototyping and speedy Silicon Valley style software development, she claimed.

The U.S. Air Force has even launched “shark tanks” or “pitch days.” According to James,

“Companies will come in, under a particular need. It might be space, it might be hypersonics…you do a quick pitch….and if you impress the government officials who are in attendance, you’ll get a credit card swipe, and maybe walk away with $100,000. These are small investments, in seed form, but a way for companies to get involved.”

VIAB’s Israeli invitees eagerly listened to James, and later gathered into small business-to-business and business-to-consumer meetings. However, most of the Virginia Israel Advisory Board’s claimed “success” stories have been anything but positive. Sabra Hummus—much praised by VIAB's Dov Hoch in his introductory remarks—used Virginia state subsidies to seize market share from a scrappy home-grown New England competitor operating without similar government largesse. Sabra Dipping Company is more of a case study of state government intervention into American consumer markets on behalf of Israel than winner-take-all competition.

Another much-hyped VIAB success story, Oran Safety Glass, has financially exposed Greensville County to the extent that it may be the reason the county recently rejected another VIAB project—a proposal from the Israeli solar energy producer Energix, owned by Alony Hetz. An Energix subsidiary wanted to install one of five utility-scale solar arrays planned for Virginia in the county. Energix and its parent company are both heavily involved in energy and real estate projects in Israeli occupied lands in the West Bank and Golan Heights which Energix refers to as “unregulated” territories. Greensville County turned down the Energix proposal, though the city of Chesapeake is proceeding with yet another. Aviva Frye, a long-time VIAB board member, simultaneously served as the U.S. representative of Energix. Frye often used her status as a government agency representative to open doors and clear regulatory hurdles for Energix in Virginia. Such self-dealing is rampant at VIAB. 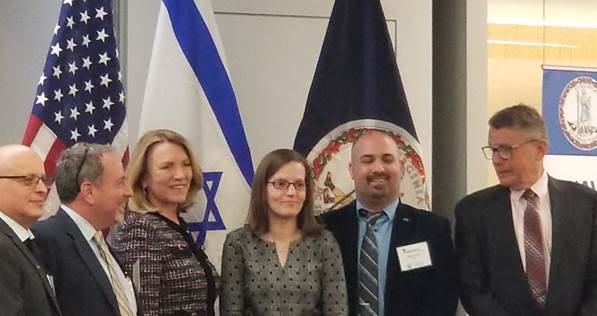 Israeli fish farm company AquaMaof soaked up $1.5 million in Tobacco Commission subsidies in Virginia and received a $10 million loan guarantee from the Coalfield Economic Development Authority. But so far, the company’s claims that it will launch a huge facility in Richlands, VA (and seize market share from home-grown recirculating aquaculture leader Blue Ridge Aquaculture) have had no visible results.

Nevertheless, the Virginia Israel Advisory Board—a brainchild of Eric Cantor with a huge network of board members who contribute heavily to state political campaigns—has had great success in channeling taxpayer dollars to Israeli companies, despite numerous failures. Funding from Virginia’s Tobacco Region Revitalization Commission has been particularly abundant. In 2014 VIAB Vice Chairman Charles Lessin received a $565,000 grant to develop a St Paul, VA refinery in partnership with the Israeli company TransBioDiesel. The project was a complete flop, but in 2019 Lessin got a questionable sweetheart deal to avoid repaying $210,000 of the Tobacco Commission loan.

Grant F. Smith is the author of the new book The Israel Lobby Enters State Government. He is director of the Institute for Research: Middle Eastern Policy IRmep in Washington, D.C. which co-organizes IsraelLobbyCon each year at the National Press Club.

Top 10 articles in this category...

A Gaza Mother Mourns the Loss of her Fishermen Sons

Jewish Voters are Turning Away from Israel and AIPAC

How Do Democrats and Republicans Differ On Palestine and Israel?

The World Looks at the Middle East—Cartoons

Dozens Are Killed in Air Strikes Attributed to Israel in Syria. But Who’s Counting?

Accounting for the Arts in Beirut After the Blast

In Lebanon, One Tragedy After Another

Letters to the Editor

U.N. Ignores U.S. Calls for a “Snap Back” of Sanctions on Iran

A Gaza Mother Mourns the Loss of her Fishermen Sons

Jewish Voters are Turning Away from Israel and AIPAC

How Do Democrats and Republicans Differ On Palestine and Israel?

The World Looks at the Middle East—Cartoons

Dozens Are Killed in Air Strikes Attributed to Israel in Syria. But Who’s Counting?

Accounting for the Arts in Beirut After the Blast

In Lebanon, One Tragedy After Another

Letters to the Editor

U.N. Ignores U.S. Calls for a “Snap Back” of Sanctions on Iran